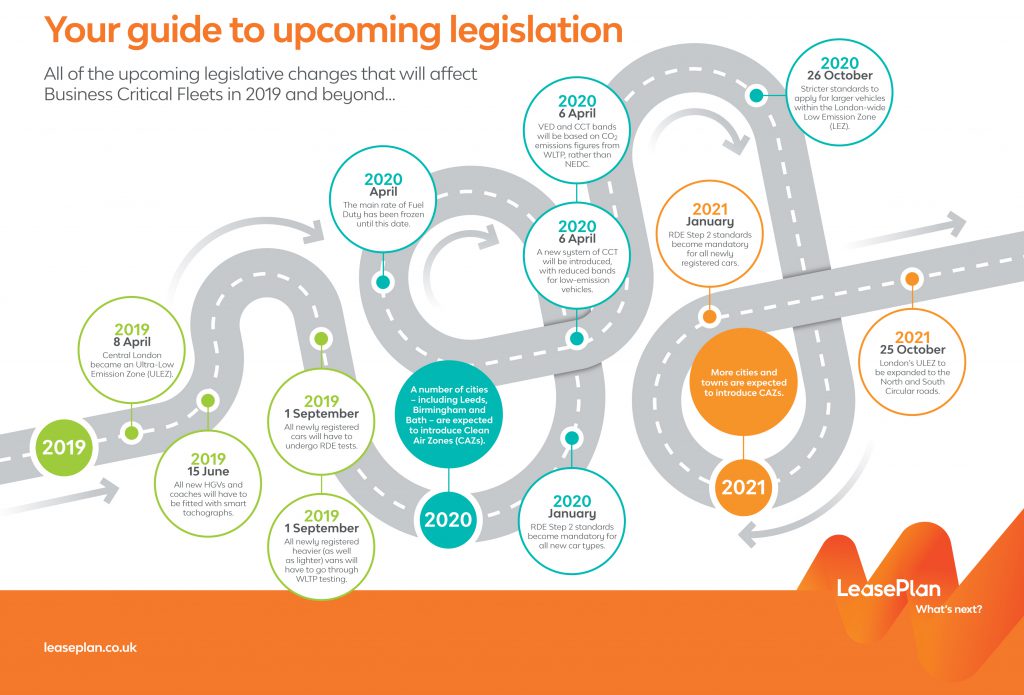 What’s happened recently – and what’s on the way

The Government has made a lot of changes for fleets recently – and there are even more to come. Here’s a quick reminder of what’s happened and a guide to what you can expect next.

However, there are two important exemptions to these diesel tax rises. The first is that the changes will not apply to vans. The second is that diesels that meet the new Real Driving Emissions step 2 (RDE2) standard will not have to pay the higher VED rates, nor the CCT supplement.

For more information about these tax changes, please see here.

As alternatively-fuelled vans tend to be heavier than their diesel counterparts, the Government increased the weight allowance on these vehicles for people with the standard category B driving licence. The allowance for petrol and diesel vans remains at 3,500kg, but it is 4,250kg for vans powered by electricity, natural gas, liquefied petroleum gas or hydrogen.

In the Budget, the Chancellor confirmed that Fuel Duty for petrol and diesel would be frozen for a ninth consecutive year. It has been 57.95 pence per litre since March 2011.

Since September 2018, all newly registered cars have had to undergo the WLTP and they’ll have to pass RDE tests from September 2019.

The new IFRS 16 standard from the International Accounting Standards Board applies to reporting periods beginning on or after 1st January 2019 and requires companies to show the vehicles they lease on their balance sheets, including ‘operating leases’. This is because IFRS16 moves away from the current ‘risks and rewards’ model to one based on who has the ‘right of use’ of an asset. However, short-term leases ­– those lasting 12 months or less – are exempt from these changes.

Since June, every new HGV or coach has to be fitted with a ‘smart’ digital tachograph that is designed to make fraud more difficult and reduce the administrative burden on fleets.

They are linked to global satellite navigation systems, which means that they can record more detailed and accurate data on driving times and rest periods. Traffic enforcement officers will also be able to access data from smart tachographs remotely, allowing them to identify which vehicles to stop for checks.

In April, central London became the world’s first Ultra-Low Emission Zone (ULEZ). Petrol cars and vans that do not meet the Euro 4 emissions standard, and diesels that do not meet Euro 6, will have to pay £12.50-a-day on top of the existing Congestion Charge. Pre-Euro VI HGVs have to pay £100-a-day. These ULEZ fees replaced the £10-a-day T-Charge that was introduced in October 2017.

All newly registered cars will have to undergo RDE tests.

From September, all vans will have type approval under WLTP. They will also need to be tested under RDE.

The Government’s Air Quality Plan orders 29 local authorities in England to introduce new measures for combatting air pollution. London’s ULEZ is in place and another five – Nottingham, Leeds, Derby, Southampton and Birmingham – must introduce Clean Air Zones by the end of 2019. The remaining 23 also have plans that should be introduced in the next couple of years. You can read more about the CAZ plans here.

The main rate of Fuel Duty has been frozen until this date.

A new system of Company Car Tax (CCT) will be introduced in April 2020. This will use CO2 figures from WLTP and have lower rates to reward low-emission vehicles. You can read more about it here.

Vehicle Excise Duty (VED) and Company Car Tax (CCT) bands will be based on CO2 emissions figures from the Worldwide Harmonised Light Vehicles Test Procedure (WLTP), rather than NEDC.

From 26 October 2020 there will be stricter emissions standards throughout London (the area covered by the Low Emission Zone) for buses, coaches and lorries. These will include a limit for Nitrogen Oxide, as well as particulates.

At the moment, HGVs and coaches weighing more than 8 tonnes must be fitted with Lane Departure Warning Systems and Advanced Emergency Braking Systems. From November 2020, the Government plans to require all new lorries and coaches over 3.5 tonnes to have them.

With so much changing so quickly, it’s important to keep up with the various regulations and requirements that fleets have to comply with. Otherwise, you might face expensive fines and other penalties. But compliance isn’t just about avoiding fines. It can also help to make your fleet greener, more efficient and improve your reputation.

To learn more about how LeasePlan can help you to stay compliant, please get in touch by filling in our online form or call us on 0344 493 5810.

To see what’s happened with legislation recently – and what’s on the way – download our infographic: 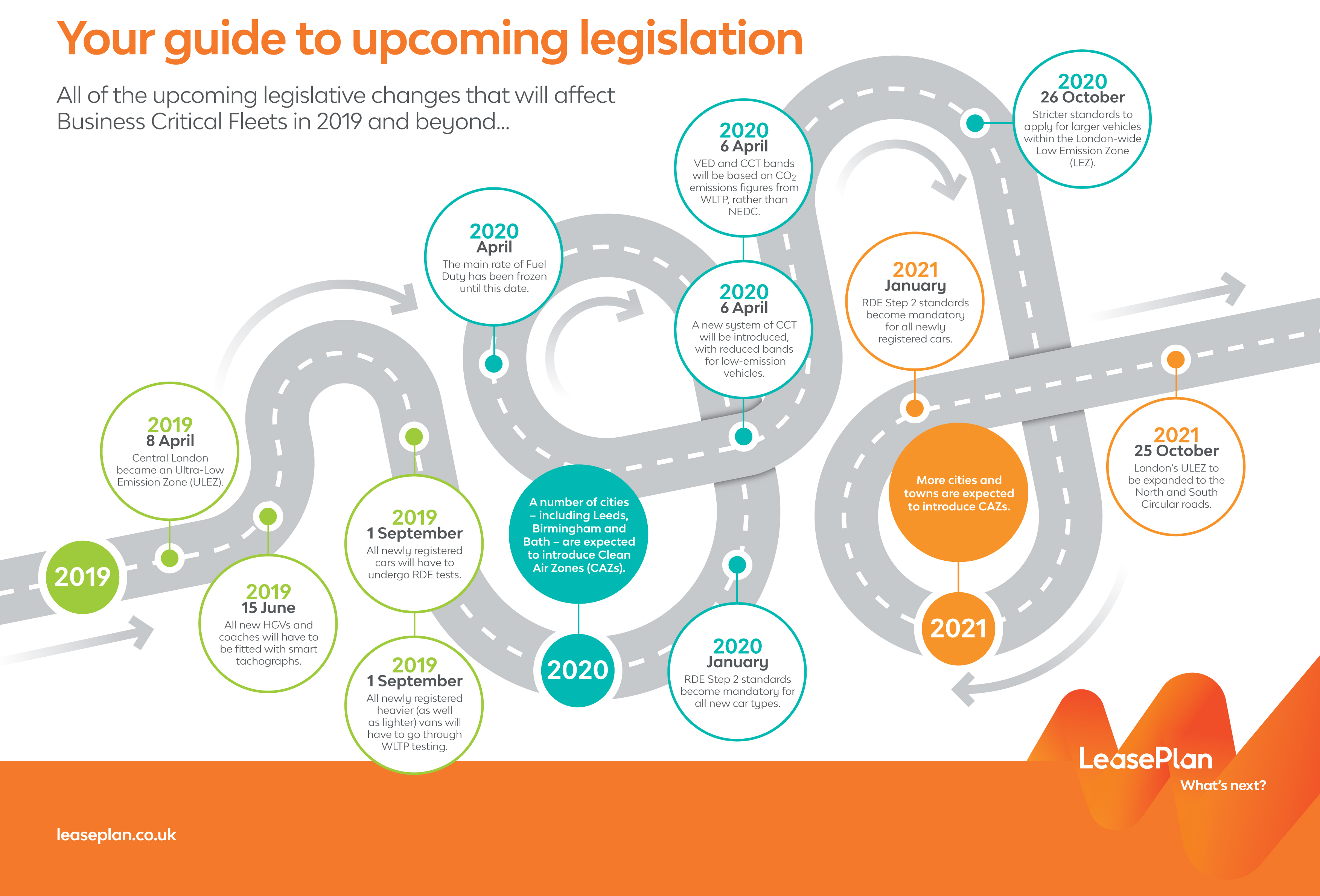 Restricted vehicle production, rising energy costs and the war in Ukraine are creating uncertain conditions for fleet operators – here’s how it might affect you.

AER and AFR Don’t leave your employees out of pocket