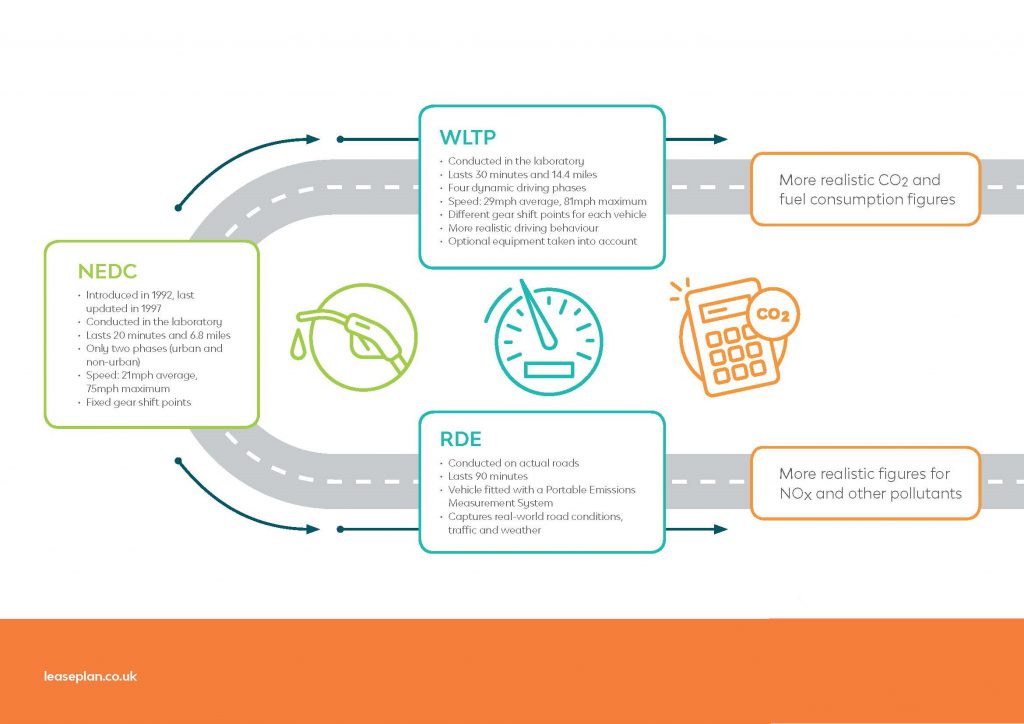 So, how do they work? Why have they been brought in? And what will they mean for the vehicles we drive? In this article we answer all the key questions about these changes, to help motorists and fleets to keep up.

Why are vehicle tests changing?

These two new tests replace the New European Driving Cycle (NEDC) ones that have been in place since 1992 and were last updated in 1997. The main aim is to test vehicles under more realistic conditions and thereby produce more accurate results for fuel consumption and emissions.

What is the WLTP?

The WLTP is a new method for measuring both carbon dioxide (CO2) emissions and fuel consumption.

Like with NEDC, WLTP tests still takes place in the laboratory. However, they involve longer tests under more varied conditions, featuring more realistic driving behaviour. As a result, the CO2 and mpg figures recorded will more closely match the vehicle’s performance in real life.

When does the WLTP come into force?

The answer is different for cars and for vans.

For cars, WLTP came into force on 1st September 2017. From that date, all new car types had to undergo the new tests – however, existing models were exempt for the first year. From September 2018, all newly registered cars have had to go through WLTP testing.

What are RDE tests?

RDE tests have been designed by the European Commission to tackle the large discrepancy between the emissions levels recorded in NEDC tests and those actually produced on the road, especially when it comes to nitrogen oxides (NOx).

As opposed to NEDC and WLTP, which are conducted in the lab, RDE tests take place on real roads. Vehicles are fitted with a Portable Emissions Measurement System and driven for 90 minutes on urban and rural roads, as well as on the motorway.

In order to be approved, new cars and vans must meet the Euro 6 standard, which sets limits for emissions of NOx, carbon monoxide and particulate matter. And, from September 2018, every new vehicle will have the Euro standard to which it has been certified displayed on its V5c registration document. That information will also be available online at the DVLA’s vehicle information service.

When do RDE tests come in?

To account for the uncertainties inherent in real-world testing, a ‘conformity factor’ applies to the NOx emissions measured in RDE tests.

In RDE Step 1, this conformity factor is set at 2.1, meaning that NOx emissions can exceed the Euro 6 limit (80mg/km) by up to 110%. New diesels can therefore emit up to 168mg NOx/km to meet the RDE Step 1 standard, and these will be described as ‘Euro 6d-temp’.

RDE Step 2 involves a lower conformity factor of 1.5, meaning that NOx emissions can only exceed the Euro 6 limit by up to 50%. To meet this standard, new diesels must therefore emit no more than 120mg NOx/km. Those that do so are described as ‘Euro 6d’.

How will these new tests affect car taxes?

Given that the emissions figures produced by WLTP are likely to be higher than the equivalent figures produced under NEDC, some cars could be pushed into higher bands for taxes which are tied to CO2 emissions – such as Vehicle Excise Duty (VED) and Company Car Tax (CCT).

However, the Government will continue to base these taxes on NEDC figures until April 2020, when it will switch to using WLTP results.

In the meantime, new vehicles that undergo the WLTP will have their CO2 emissions figures converted to ‘NEDC correlated’ (NEDC-c) figures for tax purposes, using a simulation model called ‘CO2MPAS’. As this is only a model-based estimate, NEDC-c figures can be different to those for the same vehicle tested under the NEDC. In fact, some estimates suggest that NEDC figures are about 10% higher than those achieved under NEDC.

For diesel cars, there is another way the new tests will affect both VED and CCT. From 1st April 2018, new diesel cars faced higher first-year VED rates than petrol ones with the same CO2 emissions – but Euro 6d cars (those that meet the RDE Step 2 standard) are exempt from this change. In addition, Euro 6d cars will not have to pay the CCT diesel supplement, which was increased from 3 percentage points to 4 on 6th April 2018.

How will these new tests affect van taxes?

Fewer van taxes are linked to emissions – at least currently – so the effect on tax bills will be relatively limited.

However, the Government is working on linking emissions to one tax in particular: VED. It published a set of responses to its proposal for a VED system that would incentivise the uptake of cleaner vans. That document also contained an ‘indicative’ outline of the new system, dividing vans into two different weight classes and then putting them into different bands according to their CO2 emissions. The consultation document did confirm, however, that the Government intends to consider the effect of WLTP on emissions data – and structure the new VED system accordingly.

Are there any other effects?

In the short term, some manufacturers are changing their vehicle line-ups in response to the new emissions test – including by withdrawing particular engine types. This could affect the range of vehicles that LeasePlan can offer to its customers, as well as the speed of certain deliveries.

In the longer term, manufacturers may prioritise cleaner vehicles on their production lines – including electric vehicles (EVs). With other measures being introduced to encourage greener motoring, such as the increase of Clean Air Zones (CAZs) around the country, now might be the time to consider EVs for your fleet.

LeasePlan is here to help. Please contact us here for more information or to discuss your options with your LeasePlan Account Manager.

Listen to Matt Walters, Head of Consultancy discuss what the future may hold for WLTP and RDE testing in this podcast.

Read our  whitepaper to find out more about the specific changes relating to WLTP here.