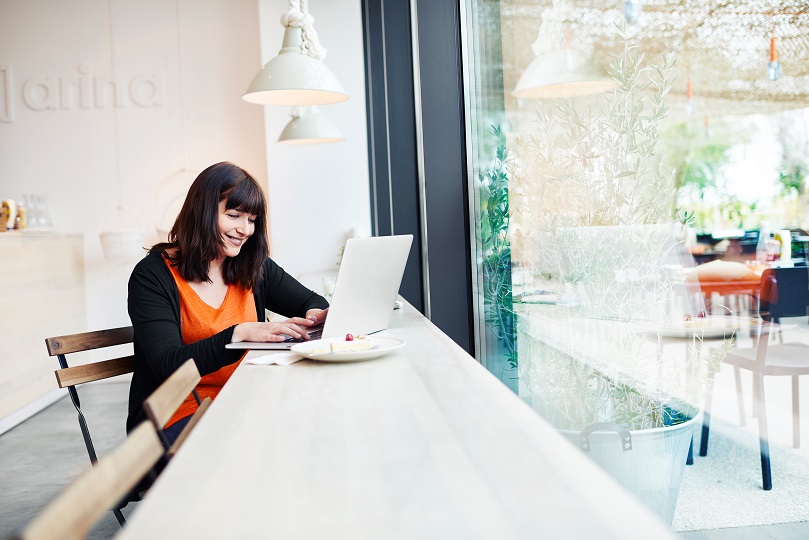 Autumn Budget 2017: Five things to look out for

With the Autumn Budget now only days away, we thought we’d provide a preview of the main things to look out for.

Alongside each Budget, the independent Office for Budget Responsibility (OBR) publishes its latest set of economic forecasts. The headline figure, and the one that underpins almost everything else, is for GDP growth. In Philip Hammond’s 16 months as Chancellor, the OBR hasn’t brought him much good news on this front – and it’s unlikely to on Wednesday.

As the graph below shows, its March forecast suggested that the economy would grow by 2% this year, which was already 0.2 percentage points lower than forecast at the time of George Osborne’s final Budget. But it looks as though that number will go even lower still. The OBR is expected to move closer to the average independent forecast for this year, which now stands at 1.6%. 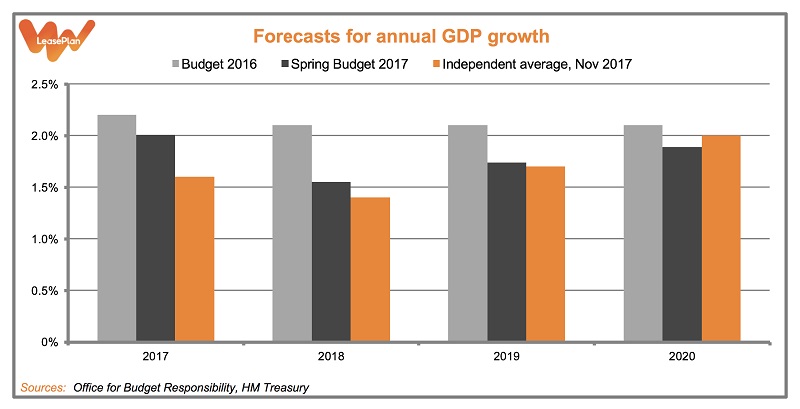 Rising prices have been another big story of Hammond’s Chancellorship. In fact, in an interview last year he said ‘Inflation is back’. Food prices have risen by 4.2% in the last year, while the cost of petrol has gone up by 2.1%. Overall inflation, as measured by the Consumer Prices Index, stands at 3% – its highest rate since March 2012. The OBR will be providing its forecasts for the next five years. Perhaps they can offer consumers some hope that this financial squeeze isn’t going to continue indefinitely. 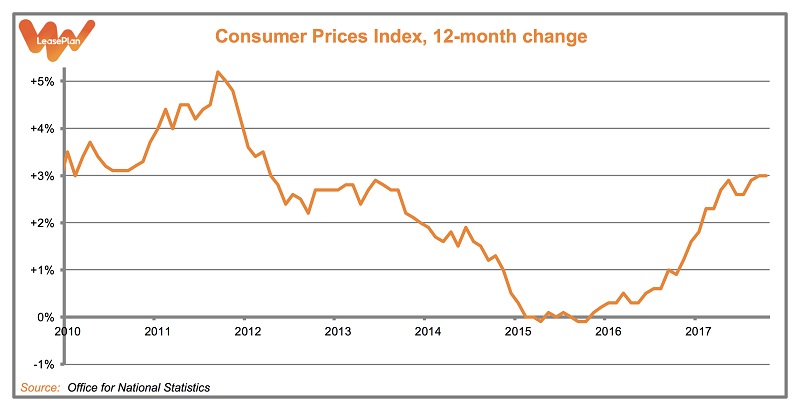 It’s very likely that we’ll see an announcement about diesel taxes in this Budget. How do we know? Because the Chancellor told us so. Back in the Spring Budget, he revealed that ‘the government will continue to explore the appropriate tax treatment for diesel vehicles, and will engage with stakeholders ahead of making any tax changes at Autumn Budget 2017’. The same wording was repeated in the Air Quality Plan in July. This is one of the most significant areas of current motoring policy – we should finally hear what the Government has planned.

It used to be the case that we knew the rates of Company Car Tax (CCT) for the next four years. However, the Government has recently allowed that timetable to slip. Osborne’s reform of the CCT system, which was designed to encourage the uptake of Ultra-Low Emission Vehicles (ULEVs), delayed publication of the new rates for 2020-21. These were finally confirmed, after another delay caused by this year’s General Election, in Finance Bill 2017-19 in September.

Hammond now needs to get the timetable back on track. He should use this Budget to reveal the rates for 2021-22, and preferably for 2022-23 as well. This would give fleets clarity when entering into new leases, and help them to make better choices about which vehicles are right for them. The Government is, of course, right to encourage greener motoring. But, to truly do that, it has to make fleets feel confident about making the switch – and that process starts by providing them with the information they need for future years.

It also means that the Government needs to offer certainty elsewhere. For example, ULEVs will require new infrastructure, including a far more extensive charging network than the one that’s currently in place. We’ve been urging the Chancellor to invest in this infrastructure for some time, so we’re hoping that he stumps up some cash in this Budget.

Starting with this Budget, the Chancellor has moved the timing of his main fiscal statement from spring to autumn. This means that we should expect him to announce the general tax rates for the 2018-19 fiscal year on Wednesday – including Fuel Duty. That rate has been frozen at 57.95 pence per litre since March 2011, but is now scheduled to rise in line with inflation in April 2018.

With the price of fuel having risen significantly in recent months, Hammond might choose to offer motorists some relief by cancelling that rise and maintaining the freeze. It might even be a good time for him to go further – and actually cut the rate of Fuel Duty.