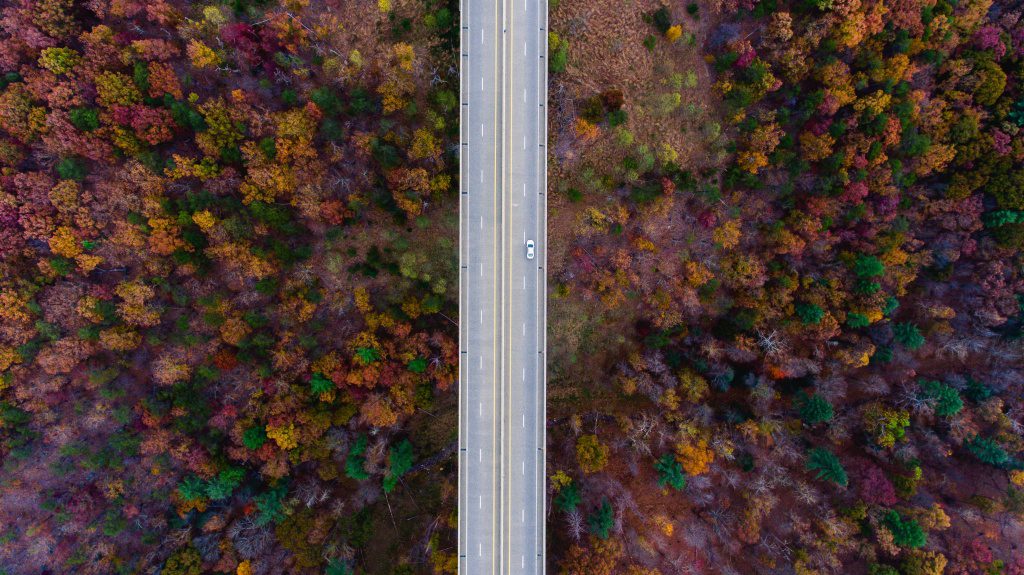 The Chancellor of the Exchequer, Philip Hammond, delivered his second Budget of 2017 on Wednesday 22 November. We’ve distilled it to five key points for fleets and their drivers.

It is as we expected: the Office for Budget Responsibility has downgraded its growth forecasts for the next few years. The figure for 2017 has been reduced from 2.0% at the time of the Spring Budget to 1.5% now. The ones for 2018 to 2021 have similarly been reduced, by a collective 1.7 percentage points – as shown in the graph below. 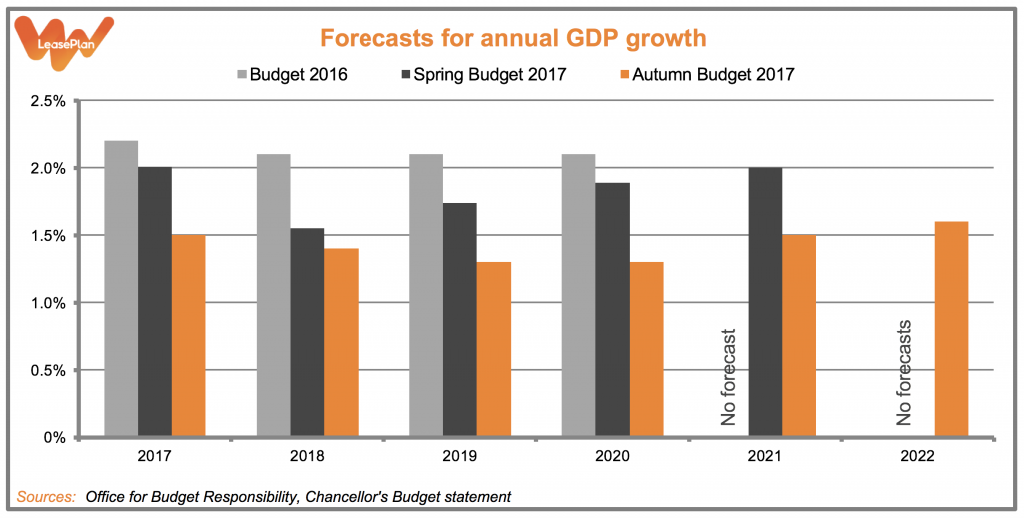 Why is this? The economic uncertainty surrounding Britain’s impending departure from the European Union is a big part of the answer. However, the OBR also cites two other reasons: the Government’s ongoing ‘fiscal tightening’ and the country’s productivity slowdown. The later of these has been exercising economists and legislators for years. Why, they wonder, has output been growing so slowly when the number of workers has risen so quickly?

It’s become an annual tradition. Practically every Budget since 2011 has frozen the rate of Fuel Duty for petrol and diesel at 57.95 pence per litre. And Hammond’s Autumn Budget was no different. He cancelled the rise that was scheduled for next year, meaning that the freeze will continue until at least April 2019.

This decision alone will cost the Exchequer £850 million a year. When taken in combination with the previous freezes, the total cost since 2010 is £46 billion, according to the Chancellor. This is money well spent. As our second graph shows, motorists are already contending with high and rising fuel prices – so any relief is welcome. 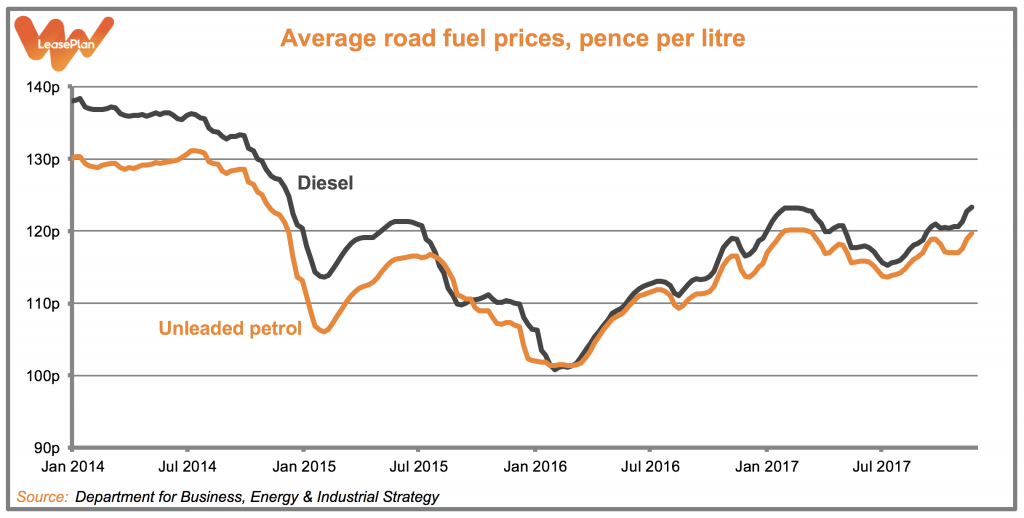 The Chancellor had told us to expect an announcement on diesel taxes in this Budget, and so it came to be. This was delivered in two parts: the first relating to Vehicle Excise Duty (VED) and the second relating to Company Car Tax (CCT).

From 1 April 2018, new diesel cars will face higher first-year VED rates than petrol ones with the same carbon dioxide emissions. These are shown in the table below. 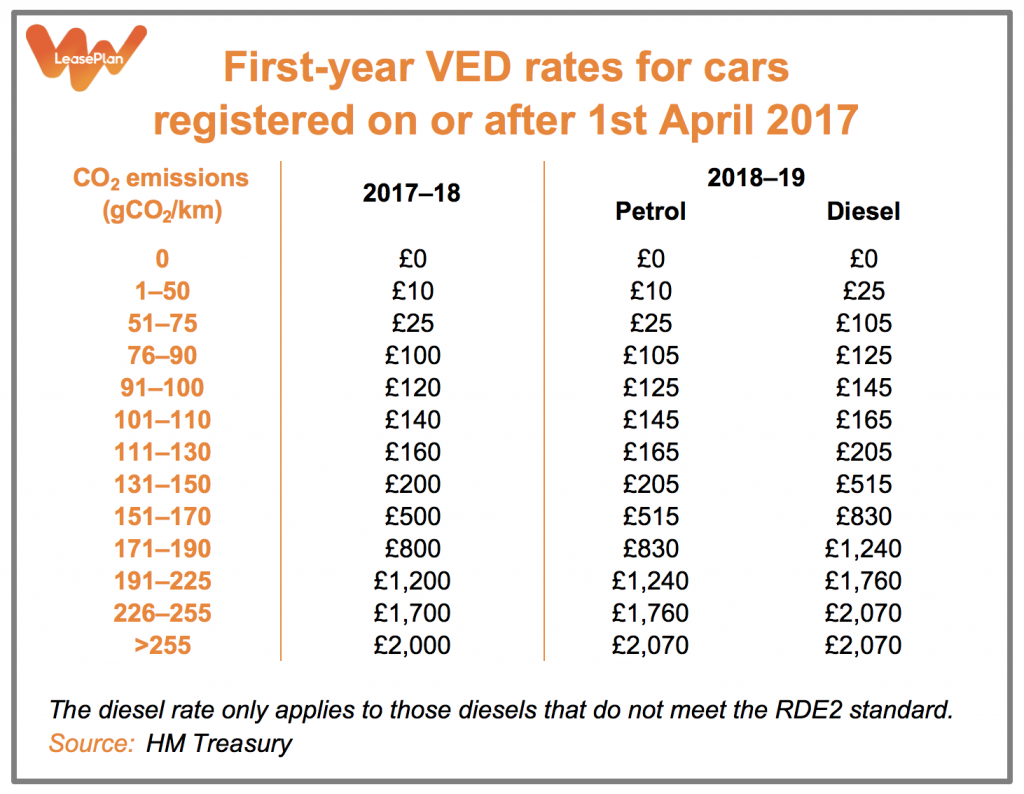 In both cases, the Chancellor has recognised the potential of newer, cleaner diesels. Those that meet the new Real Driving Emissions step 2 standard will be exempt from the VED changes and the entire CCT supplement.

The Chancellor told us about the higher diesel supplement for CCT. He also clarified which emissions standards will be used to calculate CCT (and VED) rates: the New European Driving Cycle figures will continue to be used until April 2020, at which point they will be replaced by the World Harmonised Light Vehicle Test Procedure results.

But the Chancellor neglected to give us one very important piece of information: the CCT rates for 2021-22 and 2022-23.

This is a massive let-down. As we said in our previous post, fleets and employees need clarity about these rates – and soon. Without them, they don’t have all the information they need to calculate whole-life costs for the contracts that are entering into.

LeasePlan is a founding member of the EV100 initiative, so we are committed to an electric future. It appears that Philip Hammond is too. He promised that, by 2022, 25% of central government cars will be electric.

He also had policies to encourage people outside of government to go green. The Budget provided £100 million to keep the Plug-in Car Grant going until 2020, which will help motorists with the upfront cost of electric cars. It also pledged £200 million of Government money to roll out more charge points across the country, to be matched by another £200 million from private investors. And Hammond clarified that there will be no benefit-in-kind tax on electricity used by employees to charge their vehicles.

In the last five years, the number of electric cars on Britain’s roads has grown by a remarkable 1,181%. Hopefully this Budget will allow even more motorists to make the switch.

If you would like to find out further information on how the Chancellor’s changes might affect your fleet, speak to your LeasePlan Account Manager or get in touch here.

EV100, a new global business initiative designed to fast-track the uptake of electric vehicles (EV) and infrastructure, was launched by The Climate Group in New York as business and government leaders gathered for Climate Week NYC.

This is the only initiative of its kind to encourage global business commitments on electric transport, with members committing to transition their petrol and diesel fleets to electric vehicle fleets by 2030. LeasePlan is one of the ten founding partners of EV100 and the only automotive partner.

LeasePlan will be holding Electric Vehicle Events across the globe in January 2018 – to find out more email marketing@leaseplan.co.uk

More information about LeasePlan’s involvement with EV100 is available here.