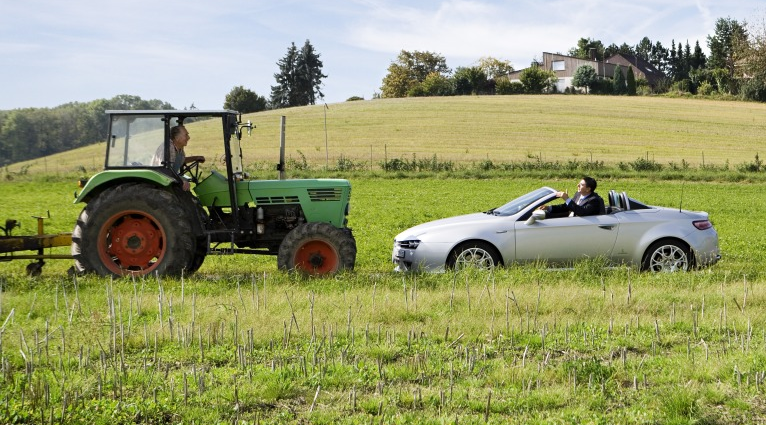 The end of tractor tailbacks

“In the summertime, when the weather is hot”, as you’ll remember Mungo Jerry telling us, you should “have a drink, have a drive, go out and see what you can find”. We all now know that this was terrible advice, as was the band’s suggestion later in the song that we should do “a ton or a ton twenty five” and their irresponsible implication that the primary purpose of a lay-by is to provide a convenient spot for a bit of canoodling.

But, whilst encouraging several reckless crimes on the public highway, they did at least leave out one of the most common and dangerous aspects of driving in Britain during the summer months. That is the moment when, stuck in a line of dozens of cars moving at ten miles an hour behind a tractor, someone decides to overtake blind on a single carriageway.

In mid-Wales, the police have become so concerned by this sort of behaviour that they have warned tractor drivers that they must pull over to allow other traffic to pass them, and that they face a £5,000 fine and three to nine points on their licences if they fail to comply.

In theory, such severe penalties are already available; article 169 of the Highway Code obliges drivers not to cause unnecessary hold ups, especially if their vehicles are large or speed-limited. Everyone who has been stuck in such a queue, particularly in the kind of humid weather much of Britain has been experiencing recently, is likely to approve of this new crackdown. But unfortunately, as with most problems, it isn’t quite as simple as getting tractor drivers to change their behaviour.

In the first place, at this time of the year tourist traffic often heads to exactly those areas where agriculture is an important part of the economy, and at exactly the time when tractors drivers are busiest. What’s more, being rural, those areas tend to have the narrowest roads – and not all of them are supplied with a lot of lay-bys or passing places. Indeed, the chances of an accident are increased not only by the absence of a hard shoulder on such routes, but the fact that they are often lined by physical obstacles: hedges, drystone walls, ditches, waterways and the like.

The principle difficulty, though, is not just that tractors are intrinsically rather slow-moving vehicles, but actually have their speed restricted by law. And those rules have not changed since the 1980s.

Last year, the Government produced a consultation paper which suggested that the rules should be relaxed. Although the speed limit for tractor is, in theory, 40mph, many agricultural vehicles are allowed to travel at only half that speed, because the Construction and Use Regulations of 1986 require them to be fitted with the same equipment as trucks (ABS brakes, amongst other things) before they can exceed 20mph. The consultation paper noted that this is not only a restriction on farmers, but a nuisance for other road users, and argued that a limit of 25mph – in line with the speed limit of 40kph which applies to conventional tractors in other EU countries.

As things stand, then, queues behind tractors are unlikely to be eradicated just by threatening tractor drivers if they don’t pull over. And the next time you’re stuck behind one, it’s worth remembering the following points. First, the tractor driver is an important part of the rural economy that you’re visiting; second, without him or her, there would be nothing in the supermarket for your picnic; third, there may not be anywhere to pull over and, finally, 20mph is as fast as the vehicle is allowed to go.