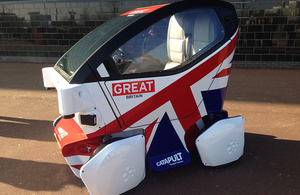 Britain is given the green light on testing driverless cars on public roads.

The trial, which follows the work by Oxford University researchers and Nissan last year,  following Google’s venture in the United States, which so far has had great success. Google’s co-founder Sergey Brin predicts that they will become commercially available in the next seven years.

Nobody knows for sure what driverless cars’ impact will be, but they have the potential to transform long-established economic patterns, business models and ways of life. So why up until now have so few people in politics noticed?

Obviously, driverless cars will mean cheaper stuff. Two-thirds of all domestic freight is road-based, and labour accounts for more than a quarter of the cost of that.  That will feed in to the cost of groceries and other high-volume goods. Public transport and taxis will become cheaper too. Given the resistance to implementing driverless trains on the London Underground at the moment, it isn’t clear how soon we’ll be seeing the first driverless London bus, but in the private sector it’s hard to see how a London cabbie will be able to compete with an automated rival that can work around the clock.

But the possibilities are much greater than that. A major selling point of the £42.6bn HS2 line between London and Birmingham, Manchester and Leeds was that it would free up capacity for rail freight by reducing passenger use of existing lines.  This seems reasonable: the West Coast Main Line carries a quarter of all UK rail freight.

But if driverless trucking reduces costs enough to make rail freight uncompetitive, this apparent saving may not be enough, and the supposed-benefit of HS2 might never materialise. As a way of reducing freight costs, HS2 might end up becoming as anachronistic as a national fax machine network built in the 1980s would have been today. The roads could become even more vital to national freight than they are today – and we will have wasted at least some of the £42bn that’s going on HS2.

Consider people’s commute into work in the morning: without having to drive, people could sit around a table, working as they would on a long train journey. The opportunity cost of a longer commute will fall as doing work during the journey becomes an option. This may even mean that in-office work hours could fall, as the commute becomes seen as the first part of your working day.

Take likely future CAFE standards, whereby a sedan should be doing 40 miles to the gallon. We’ll assume that you can travel at 60 miles an hour (I know, a real laugh in LA but we’ve got to make some assumptions) and that you earn something like the median US hourly wage of $20 an hour (please note, all these numbers are very rough) and gas is $5 a gallon. Currently, if you try to commute two hours each way then you’re burning $15 of gas each way and you get absolutely no work done in this time at all: you’re losing $40 each way in wages that you could have been earning if you weren’t trapped in a darn car. $110 a day in true expenses therefore for being able to raise the kids out in the tranquil boonies even while you still work downtown.

Now run the same numbers with a driverless car. You’re as productive online in the car as you are at work. Gas costs are the same, so your true costs have now dropped to $30 a day to live in the boonies on that larger lot in a bigger house. Obviously, more people are willing to pay $30 a day for that lifestyle than there are willing to pay $110 for it. The exurbs will increase as the true cost of commuting will be coming down.

Most people already seem to prefer low-density housing, and reducing the cost of commuting will allow people to move further and further out of inner cities. This will create even greater pressure on planning laws, which currently tightly restrict development on Green Belt land. The more attractive life on this land becomes, the harder it will be for politicians to avoid reforming planning. And the longer they wait, the greater the shock to existing house prices will be.

Issi Romem points out that parking space in cities will become much less important, as driverless cars drop their passengers off before driving away to park in a quieter part of the city.  Even traffic congestion may be relieved as cars synchronise their routes to avoid traffic jams.

So far, the regulatory response to driverless cars has been mixed. Google has successfully lobbied the Californian, Nevadan and Floridian state governments to allow trials on the roads.  But in Washington DC, a city councillor has recently proposed a bill that would cripple the operation of these cars, requiring that a licensed driver be present in the vehicles at all times and imposing a special tax on owners of these cars.  The response in Britain has been more muted: we can only hope that the designers of these cars can persuade MPs not to allow an overbearing understanding of the precautionary principle to thwart such a promising development.

Driverless cars may turn out to be much less than we may hope, and articles like this may some day be looked at in the same way as we view 1950s-era promises about every family owning a flying car. So far, though, the technology seems solid. What’s not clear is the extent to which this will affect our lives, and how we – and especially government – should make plans today for technology that won’t come into use for a decade.

Sam Bowman is Research Director at the Adam Smith Institute