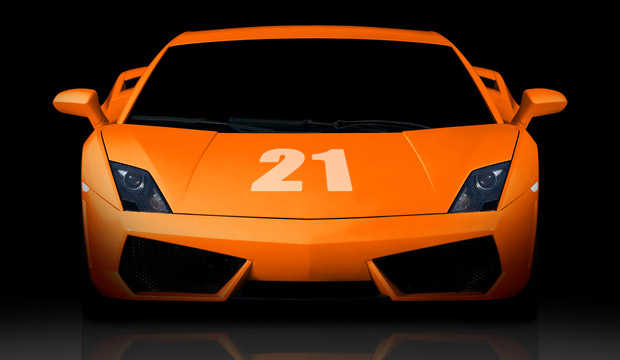 Top Gear: it celebrates its 21st and acts like a 9-year-old

21! Traditional age of majority, of maturity, of the key of the door, of grown-upness. That is, unless you’re Top Gear, the BBC’s motoring programme, which embarks on its 21st season on February 2. Even the show’s own executive producer, Andy Wilman, describes it as presented by “three badly dressed middle-aged men”, but squarely aimed at “people with a mental age of nine”.

Certainly, Top Gear decided long ago (when it relaunched in 2002) that the comparisons between the relative horsepower and torque of family saloons that their viewers might actually buy made for less entertaining television than face-offs between supercars which cost more than most people’s houses. They then discovered that people were even more entertained by debates about which were the worst cars, when Jeremy Clarkson compared the demerits of the Austin Allegro and the Morris Marina:

Having concluded that the Marina was worse, and following the logic of a nine-year-old to its natural conclusion, the team began demolishing Marinas. Often in surprisingly inventive ways.

And so the magnificent modern Top Gear format was born. Jeremy Clarkson, James May and Richard Hammond simply set out to destroy vehicles. Sometimes metaphorically, with withering criticism. The BMW Z4, for example, was scathingly branded “uncool” on the Cool Wall, which rated the desirability of cars. The brazenly false nature of these judgments was quickly acknowledged, though, when estate agents abandoned the Z4 for the Audi TT, at which point the presenters admitted that they had always thought the Z4 was cool – it was the people who drove it they objected to.

The same held true for anything sold on the basis it was environmentally friendly, economical, practical, family friendly or French. As the budgets increased, this abuse became increasingly physical. The team attempted to cross deserts in family saloons. They picked up cheap used cars and tried to navigate American redneck states with “Glad to be Gay” spray-painted on the sides, or dead cows strapped to the roof. They took three supercars to France, and failed to get out of an underground car park in Paris.

This childishness extended to insulting not only the French, but any other nation they could think of. The Australians, the Germans, the Romanians and numerous others got short shrift from the presenters, leading on one occasion to an official complaint from the Mexican ambassador (they had suggested he would be too lazy to complain about their characterisation of Mexicans as lazy). There is an entire Wikipedia entry devoted to ways in which the programme has caused offence which have included everyone from lorry drivers (there were 500 complaints when Clarkson suggested they were likely to murder prostitutes) to environmentalists convinced the programme had despoiled the Makgadikgadi salt pan in Botswana.

The BBC’s response to all of this has been to acknowledge that Top Gear is now only incidentally a motoring show, cheerfully admitting that it was “an entertainment programme” which often faked, or set up, its stunts. All this has made the programme almost certainly the most successful allegedly special-interest television show ever made. A huge chunk of its audience wouldn’t know a spark plug from a fan belt, and couldn’t care less, but tunes in avidly. It is hugely popular overseas. Even with the huge budgets required to make it, it is one of the Corporation’s most profitable and recognisable shows – to the point where other BBC programmes have taken to sending it up:

If you doubt the importance of this superficially ludicrous show, just pause to consider that the BBC is launching three new international channels, one of which, BBC Brit, has chosen Jeremy Clarkson as the face to represent it, and will fill much of it schedule with episodes of the programme. Or the fact that celebrities like Tom Cruise and Cameron Diaz jostle to drive a Kia Cee’d, in Star in a Reasonably Priced Car.

Picking a badly dressed, overweight, exceptionally untrendy, gaffe-prone and politically incorrect 50-something to front a flagship channel hasn’t happened since the early days of the Fox Network, when Homer Simpson burst upon the world. But history teaches us that it worked then. And it may work again, given that Top Gear not only a long-running and – despite our better judgment – wildly entertaining programme, but one of the BBC’s most reliable cash-cows and exports (long pause) in the world.