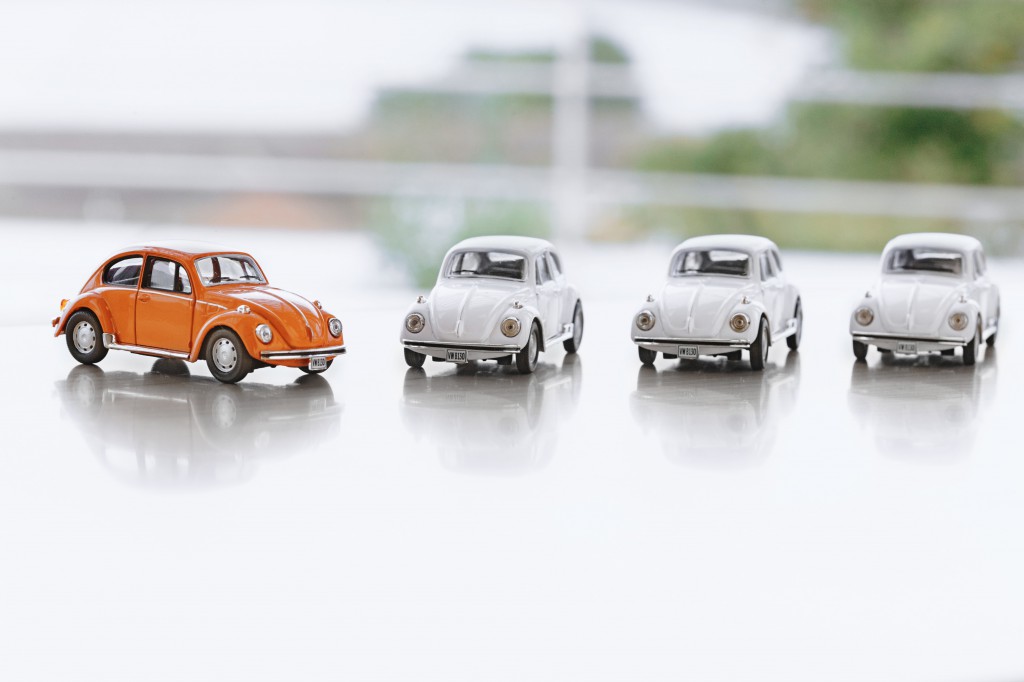 Does the stickshift scare your wife? [Guest Blog]

“Dispense with a horse” urged The Winton Motor Carriage Company in the earliest known advertisement for a motor car, “and save the expense, care and anxiety of keeping it.”

Published in Scientific American in 1898, and illustrated with a car that is a very literal image of the “horseless carriage”, the ad goes on to boast of the “3 to 20 mile an hour” capabilities of the Winton motor, “Price $1,000.” The Winton ad worked, with more than 20 vehicles sold in the aftermath of its publication – a remarkable number in those days – and by the turn of the century the Winton motor plant was the largest in the world.

Fast-forward to the heyday of motor trade advertising in the mid-20th century, and it was the expense, care and anxiety of keeping a car, not a horse, that the “Mad Men” were looking to address. These were the concerns which lay behind an innovative and influential series of American adverts for VW from the late ’50s/early ’60s. Playing on the simplicity and economy of the VW Beetle (or “Bug” in the US), these ads stressed the advantages of the car’s diminutive size and clever design and deftly contrasted it with established concepts of automobile advertising.

The standard auto ad at the time, particularly in the US, was as big and loud as the cars it sold. Brash Fords and Chevys, almost always red, thrust their way out of the image above boastful tag lines: “The mighty Chrysler for 1957… most glamorous car in a generation”; “You get more to be proud of in a Chevy!” The Cadillac Chevrolet Impala Convertible immodestly declared itself to be “The new standard of the world in supremacy” while the ’58 Ford takes advantage of the ad’s obligatory blonde to work something sexist into its tagline of “Hot, handsome… a honey to handle”.

The underlying purpose behind all this advertising, along with the aspirations of its target audience, are encapsulated, quite brilliantly, by the ad for the New Continental Mark III. “It says so eloquently…‘This man can have any car he likes’.” And, by extension, no doubt, any woman, any job, any thing…

So when VW came along with their apparently self-deprecating, basic-looking, black and white ads they stuck out as much as the little European cars themselves did amongst all those showy Buicks and Oldsmobiles. “Think small” was the message, and the Doyle Dane Bernbach ad agency presented it with a marvellous graphic punch.

The monochrome (later colour too) images typically show the Beetle against a plain white background. There’s nothing to see but the car, something that contrasted strongly with the contemporary vogue for adorning car ads with all the accoutrements of the ideal lifestyle. The VW image would take up the top two-thirds of the print space, though the car might be barely a dot in that space, leaving the lower third for text, three columns usually, detailing the magnificent advantages of the product.

As with all good ads, the visuals are memorable and distinctive but they also complement the copy, reflecting the same wit and understated confidence. Ultimately, the humour was the vital element in the success of these ads.  As the great graphic designer Saul Bass said:

“Wit is an important tool in communicating to people, particularly about things they would not accept, believe or tolerate if presented in straightforward terms. People will smile and respond empathetically to situations that embody beliefs which contradict their own.”

The VW ads were all about persuading Americans to contradict everything they thought they already knew about cars. “It makes your house look bigger” runs the tagline below a small VW on an expanse of white space. At a time when the language of advertising was all about size, this was revolutionary stuff, but in the manner that became customary for the VW ads, the copy goes on to quietly invert itself: the poor little VW becomes the very smart VW that uses its size and features to save you money. So, while making your house look bigger, the 32 miles to the gallon and the 40,000 miles between tyre changes will certainly make your bills look smaller. The stealthy seduction is so strong that by the end of the text and you start to feel a prize schmuck for ever looking at any other car.

“Does the stickshift scare your wife?” runs one ad from 1965, suggesting, with some irony, that a lady’s natural terror of the manual gear shift might be the only thing between a man and his Bug. The simplicity of the system is then laid out, as well as all the advantages of manual transmission from better handling to more economical mileage. Really though, the ad confesses in quality VW style, that some like the system “just for the fun of it”.

The VW ads succeeded in persuading people that they would be better off – financially, intellectually, socially – behind the wheel of a Bug than a Buick. The advertising status quo was overturned, indeed the very notion of what a car should be and should represent was dismantled through these ads. Little wonder that advertising enthusiasts today still revere the classic VW ads as one of the greatest print campaigns of all time, while the phrase “Think small” has gained a permanent position in our cultural lexicon.