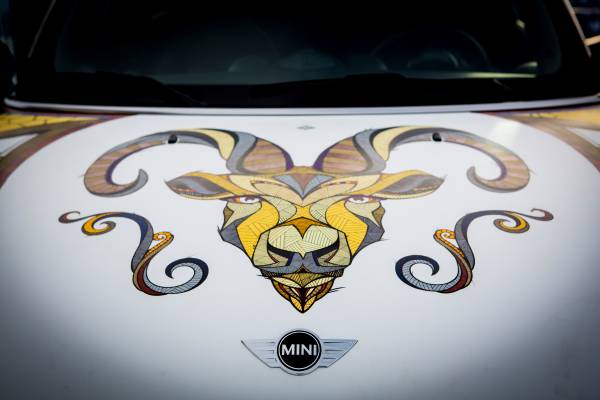 A few years ago, a friend of mine – the kind of creature who enjoys little more than stripping an engine to the core and rebuilding it with special extras – met me in his new (old) jeep. A funny looking thing it was, gigantic of wheel, heavily chromed and long in the body but with a delicate, leather bound steering wheel which seemed to have been transplanted from a country gent’s Rover of yesteryear. I remarked on the curious disconnect between jeep and steering wheel and learned that the vehicle was a Japanese import and that the Japanese were crazy for their customizations.

We British, on the other hand, are rather more accustomed to taking our cars in showroom condition and striving to keep them that way. Messing about with the original can be seen as an undesirable detraction whether it’s changing a fitting or painting the exterior. Painting, in fact, is seen as especially problematic – think of the hippy’s VW camper van daubed with peace symbols and flowers… But think again! Car art can be serious art.

David Hockney was responsible for a striking addition to the canon when he customized the paint work of a 1995 BMW 850 CSi. His approach not only emphasized the structural dynamics of the vehicle itself but also played with the very substance of the motor car. Hockney’s design sees a stylized interpretation of the car’s internals displayed across the surface – an engine section lies over the bonnet and the driver’s body and legs are displayed on the front door. A little dog stands behind the driver, while the passenger side of the vehicle is dedicated to an evocation of the world around the car with an abstracted landscape unfolding across the doors. As Hockney pointed out, “traveling around in a car means experiencing landscapes”. Why not bring the landscape to the car?

The Hockney design formed part of BMW’s ongoing Art Cars series, in which famous artists are commissioned to produce unique designs for particular models of BMW. Participating artists have included Robert Rauschenberg, Roy Lichtenstein and Jeff Koons but while many of the artists elected to create designs which were then scaled up and applied to the car by technicians, Hockney worked directly onto the car’s surface with real paint.

Another artist in the series who chose the hands-on approach, perhaps surprisingly given his enthusiasm for the factory floor approach to art, was Andy Warhol. The master of Pop Art turned to paint to express an impression of the car in motion. Scrawled, wet paint allowed him to indicate movement and speed, blending a messy fusion of greens and blues, yellows and reds. The result is something that has none of the graphic strength of Hockney’s paint but which probably looked suitably speed-blurred when the finished car was raced at Le Mans in 1979. It finished in sixth place, in case you were wondering.

This kind of corporate customization is not so unusual in the motor industry. Volvo have been playing the game recently with their ‘Volvo Art Sessions’ which allowed artists to not only decorate cars but also create entire micro environments around them. The creation process, which in 2013 involved six different artists, unfolded live in Zurich’s main train station, resulting in some bizarre, immersive and unexpected experiences for the commuters. All good fun, and perhaps even good marketing.

The non-corporate world of car decoration however remains surprisingly thinly populated. The development of increasingly workable spray paints saw a surge of enthusiasm in the 70s and 80s but DIY car art remains a distinctly niche activity. The simple beauty of Keith Haring’s thinly decorated 1986 work ‘Untitled (Car)’ – a 1963 Buick Special enlivened by his jumping enameled lines – is not yet a look greatly sought after by the average motorist, no matter how hard they may struggle to locate their metallic silver vehicle in the swamp of imitators at the supermarket car park. Customization does exist but truckers, surfers and hippies remain its custodians.

But perhaps things will change. For a simple and economical customization, car art aficionados in the States – and not all of them from the core demographic –  are abandoning the spray can for the simple pen, or the ‘Sharpie’ permanent marker, to be precise. This pen, beloved of graffiti artists and graphics enthusiasts alike, is the ideal tool in the customization kit. Fast, permanent and accurate, it allows artists to make subtle designs that are be a little less shouty than some of their painted predecessors. A lick of clear paint on top, and there you have it: a everlasting, unique testament to individuality that will accompany you on your travels. Perhaps now is the time to sharpen up your image…