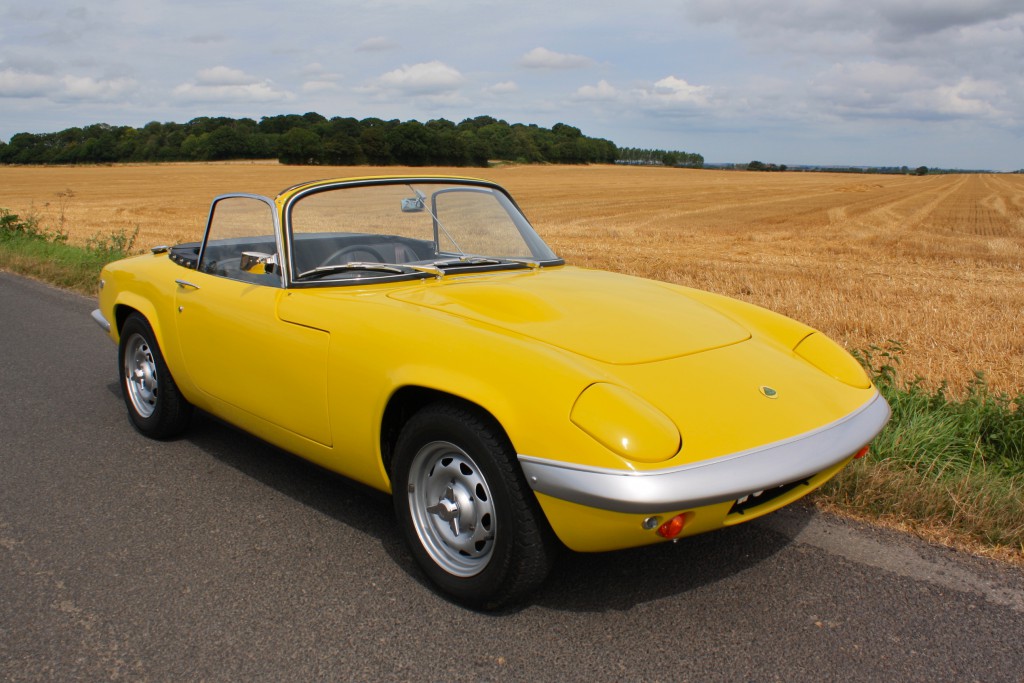 It was quite a step-up. My first and much-loved petrol-driven vehicle was a Ford 100E van, number-plate WLL 54, painted in household matt emulsion pillar-box red.

It could do 0-50mph (never did manage to get it any faster) in about 30 minutes, and depended on two huge wing mirrors the size of wall cabinets to see what was around me risking being on the same highway.

From there I moved straight on to a pristine bright-yellow soft-top Lotus Elan Sprint, faster than the speed of light and so gorgeous that grown men fainted with car lust as I swoooshed by with a roar.

It was in the late 1970s, and I first saw her parked on the drive of a motor mechanic mate who was re-assembling her after neglect and a crash had apparently left her derelict. Her fall from grace was premature, however – under the expert hands of my devoted friend she was being brought back to life and full glory.

I watched in awe as he dismantled her to the tappets then reassembled her lovingly until she arose like the original phoenix from the ashes. And once he’d done it, his wife thankfully got pregnant and he couldn’t afford to run both – I of course exploited his misery and paid a pittance (a few hundred quid) to rip the keys from his grieving hands.

She both delighted and terrified me. The first time I put my foot down hard I nearly wiped her out – I totally lost control and she spun repeatedly, nearly rolled, and disappeared in a cloud of tyre smoke. Luckily I’d had the sense to wait to try it until 2am in the morning on a huge empty supermarket car-park.

But I was a quick learner. I persuaded my wife we should go to Cornwall from Manchester on holiday just for the joy of the 350 mile drive. On a motorway she could be deceptive, and mistaken by the inexpert eye for a much lesser creature, say a Triumph Spitfire. On that journey, on the M5 south of Birmingham, some travelling salesman in the company Cortina closed up right behind me in the fast lane and flashed his headlights.

I was already doing 80mph but youthful testosterone kicked in, I kicked my foot hard….and I recall to this day the joy of being slammed back into my headrest as she took off like a yellow cheetah.

She just kept going, and company man disappeared instantly from my rear view mirror never to bother me again. It was awesome! Incidentally, we had the soft-top down.

I knew at the time she still had more in her, up to 135mph according to the manufacturers, but frankly I was too scared. Don’t forget, she was absolutely tiny – the car weighed less than 700kgs – and that fibreglass body didn’t feel very resilient. The leather bucket seats with rally-seatbelts, the walnut steering wheel, tiny gearstick, shiny Lotus racing knock-on wheels, were lovely and alluring, but really it was just you sat on top of an engine.

Two years later, 29th July 1981, I was driving home from work one lovely summer afternoon through totally deserted streets as it seemed the rest of the world watched and celebrated the Royal Wedding of Prince Charles and Lady Diana Spencer.

I stopped at traffic lights, waited patiently for green, got the signal, eased forward gently (honestly)…..and wallop! A Saab came through its red-light, totally broadsided me, sent me spinning into a lamp-post smashing the Sprint to pieces.

Bizarrely, the two guys who staggered out of the Saab, which typically seemed totally untouched, were dressed head-to-toe in American Civil War Confederate Army uniforms – they’d been to some re-enactment battle! Sadly though, I was the loser this time.

Luckily those bucket seats and rally seatbelts kept me safe and I suffered little more than whiplash, but tragically my beloved yellow bird was dead, totally wiped out.

In the years that followed I had another Sprint, Lotus 2+2s, an MGC-BT in Racing Green, blue Triumph GT6 (my second favourite car), Mazda Xedos, various Jaguars and so on.

But I’ve never ever stopped loving – or grieving for – my beautiful yellow Lotus Elan Sprint.