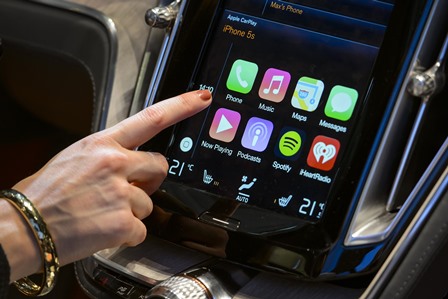 It’s all to CarPlay for

It proved to be a tale of two trade shows for Apple. The iPhone and iPad maker shunned the tapas on offer in Barcelona at Mobile World Congress – the world’s largest mobile phone show – thus leaving the field open for the likes of Samsung, Sony and Nokia to grab the headlines with new phones. However Apple did pitch up the Geneva Motor Show to stand alongside executives from Ferrari, Mercedes-Benz and Volvo that have rushed to embed its new CarPlay system into their machines.

There is also a delicious irony in the fact that car companies include Ford and Volvo have also started launching vehicles in Barcelona to add a bit of tech glitz to their brands and to try and keep control of the dashboards in the cars. General Motors is estimated to make around $1.5 billion a year from its OnStar system. That has a knock-on effect for the phone companies too with this year’s MWC beset by rumours that Ford was set to boot Windows out the window in favour of BlackBerry’s QNX automotive software that was originally developed for use in Crusher tanks.

It is the latest bout in the battle to control every screen that a human being glances at. The car companies have long stressed the benefits of connecting up the vehicle whether that means merely installing Spotify on the dashboard or turning the vehicle into a fully-fledged wi-fi router on wheels bleeping information out to sensors installed in the street lamps and motorway stanchions you drive past.

Vodafone just struck deals to implant SIM cards into Volkswagen and Audi cars which is a further sign that the telecoms companies see vehicles as key to future growth in so-called ‘machine-to-machine’ connections.

The stakes could be even higher for technology companies like Apple, Google and Microsoft which spy a wealth of data to be tapped in our driving habits and to pipe even more apps at consumers. Apple has been toying with adapting its iOS software for cars for a number of years and the new CarPlay system will make its debut on the Ferrari FF four-wheel drive this week. The system looks like a scaled-down version of the iPhone grid offering up maps, messages and music – but not e-mail – that can be used either as a touch screen or through voice control using the Siri commands.

So does this mean that the Ferrari FF, or the new Volvo estate, will Transformer-like toggle between a car and an iPhone in the future? Perhaps if some of the wilder dreams of financial analysts hatch and the iPhone maker buys Tesla but for now the battle is to ensure that customers remain locked into using iOS when they are sitting on the couch with a tablet, walking down the street glued to their iPhone and now driving down the M4 tapping on the CarPlay dashboard.

The safety merits of voice controlled-GPS and messaging have been stressed by Apple and its rivals but some car companies fear that adding more technology and functionality onto the dashboard could increase, rather than decrease, driver distraction. In time, those Vodafone SIMs may act to set off alarm bells if a driver hasn’t noticed the car in front has suddenly slowed down to offset that risk. Until then, to paraphrase The Doors, drivers should keep their eyes on the road and their hands upon the wheel.

Guest Contributor Nic Fildes is Technology and Communications Editor of The Times.